Maybe I’ve been under a rock or something, but I nearly fell off my chair when I Googled for my rather old Tony & Tina Nail Paint and discovered that Tony & Tina Vibrational Remedies is still in business (though they apparently took a hiatus sometime in between), and they’re still into all that chakra stuff that I know very little about. This is almost as cool as finding out that Revlon have brought StreetWear back. (No, they haven’t). Well, maybe not quite as cool as that.

But still! I thought that my polish was long dead, but T&T still make nail polish, too! It doesn’t look the same and the color options are different, though. Pricing seems in line, however.

Just look at their current polish bottle. I don’t even understand how it works.

The Tony & Tina polish I have is from the mid-to-late-90s, when spending more than $5 on nail polish was a really big deal and not something I normally did. But then Eaton’s, the venerable old Canadian department store, closed down and, well, I took advantage of some cosmetics being cleared out.

The bottles were fabulous, chunky, and had this massive, shiny bulbous cap. It’s probably one of my all-time favorite nail polish bottles, despite the seam going around the cap’s equator.

I only bought one Tony & Tina polish (and one vampy Mood Balance Lipstick that came in a space-agey metal tube), since I’m pretty sure it was still more than CA$5 on clearance. Visualize was the color I chose—probably because the color selection wasn’t great at that point. But I dig it! It’s a slightly pinked, medium purple shimmer that veers metallic. I have a feeling that I thinned it out with a bit of nail polish remover back in the day, before I knew about nail polish thinner. So, because of my ignorance, or perhaps the polish just hasn’t aged that well, Visualize dried a bit matte for my swatch. Nothing a shiny top coat won’t fix, though. 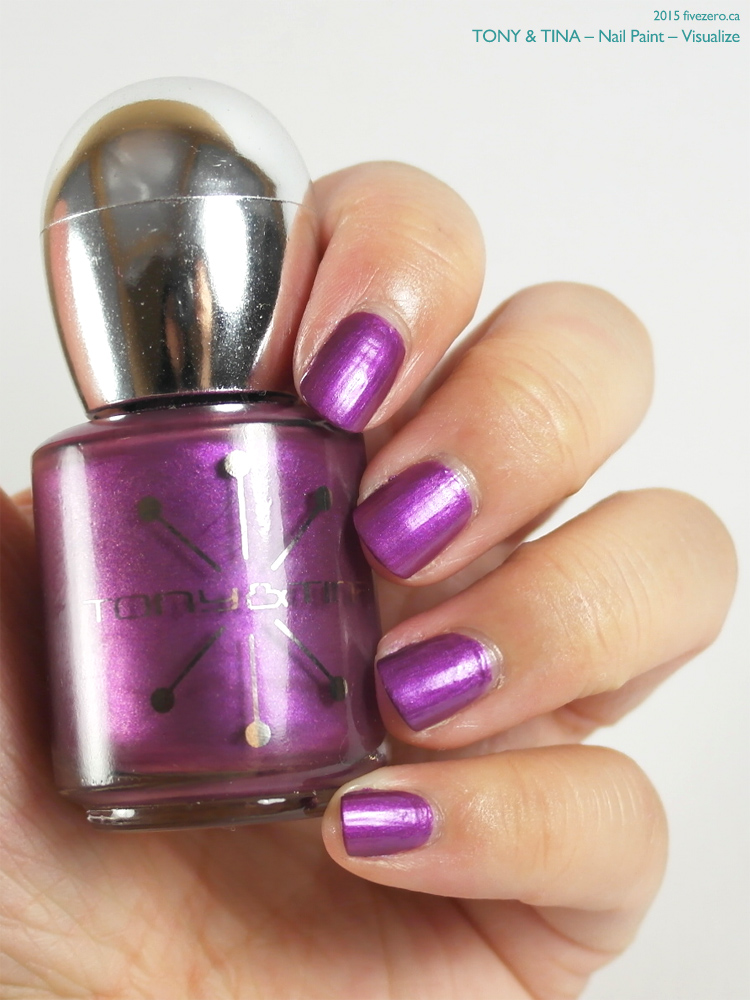 I still have two other older Tony & Tina polishes to swatch. I suspect I bought them off eBay, or possibly swapped for them. Either way, they will show up on Throwback Thursday at some point! Both are microglitters!

Tony & Tina Vibrational Remedies’ Twitter indicates that they are based in New York, NY, USA.